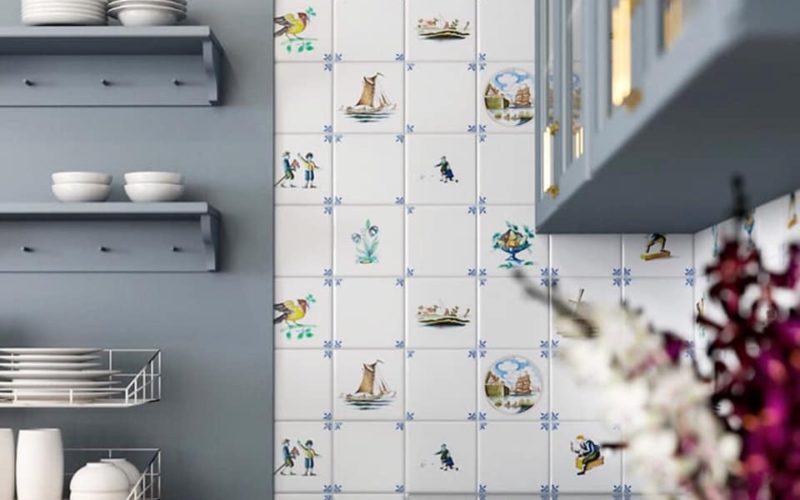 The Netherlands is an amazing country. A small nation that seems to have a disproportionate number of iconic symbols. Think for a minute about canals, dikes, wooden shoes, football teams in orange uniforms, windmills, tulip bulbs, and of course Delft Country Tile .

The actual city of Delft, for which the tile is named, is located in the southwestern portion of the country and sits approximately one meter above sea level. In addition to tile, the city was also the home of Johannes Vermeer who painted the well-known Girl with a Pearl Earring.

Getting back to Delft tile, Holland.com gives us a very broad outline with: “Delft Blue is the world-famous earthenware that has been produced in the city of Delft since the 17th century. Between 1600 and 1800, this earthenware was popular among rich families who would show off their Delft Blue collections to one another. Although the Delftware potters preferred to call their earthenware “porcelain”, it was only a cheaper version of the real Chinese porcelain. Delft Blue was not made from the typical porcelain clay, but from clay that was coated with a tin glaze after it was fired. In spite of this, Delft Blue achieved unrivalled popularity, and at its peak, there were 33 factories in Delft.”

In 21st Century America, the Delft style offers the modern design professional and astute homeowner a bucolic selection of  fifteen legacy motifs on the traditional white ceramic tile body. As you can see in the images in this post, the Old World meets the New World quite nicely. Thanks for reading.