The Arts and Crafts Movement: Tiles

The International Design Movement, later to be known as Arts and Crafts, began in Europe, and especially in Britain, in approximately 1860. The exact genesis of such things is never crystal clear.  Textile designer and writer William Morris was extremely influential in fanning the Arts and Crafts flame. Morris had, in turn, read the works of art critic and essayist John Ruskin. These pioneers are pictured below left to right. 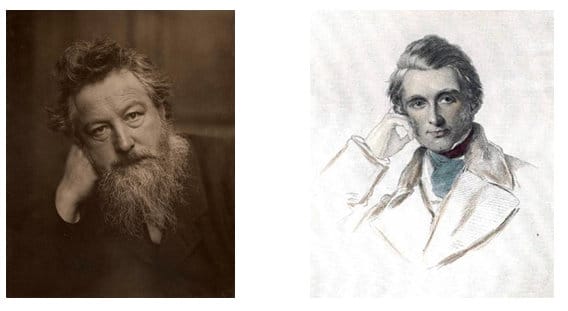 Most design historians will agree that the general theme which rallied the proponents of the Arts and Crafts school was a reaction to the Industrial Revolution. There was tremendous energy generated by the search for a romantic ideal as exemplified by the lone craftsman plying his trade in a simple, pure, authentic fashion.

The Americanization of the Arts and Crafts approach had a profound impact on architecture and design that we still feel today. This is spawned directly or indirectly by such familiar styles and themes as Craftsman, Mission, Bungalow, and even by extension The Prairie School of Frank Lloyd Wright. In practice, the well-designed middle-class home, as desired by a homeowner, could and should be delivered by the design team.

Since we want to narrow the topic down to Arts and Crafts tiles, let’s focus on Pasadena, California in the early 20th Century. Legendary Ernest Batchelder’s Tile shop provided artisan pieces to the likes of Greene and Green Architects for projects such as the iconic Gamble House. The two tile images below are from this home, which was incorporated into Batchelder Residence. 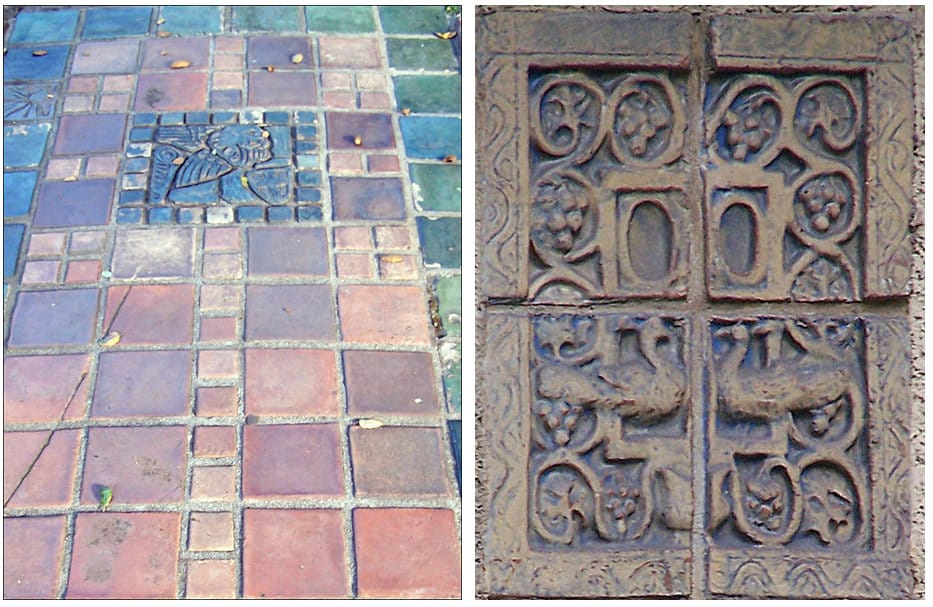 At Country Floors, we have drawn inspiration from the famed Charles Voysey. As an architect, furniture, and textile designer, this Englishman exerted tremendous influence on the Arts and Crafts space. Our Crossings Collection pays homage to his wallpaper artistry, as evidenced by “The Saladin,” a famous Voysey work, depicted below. 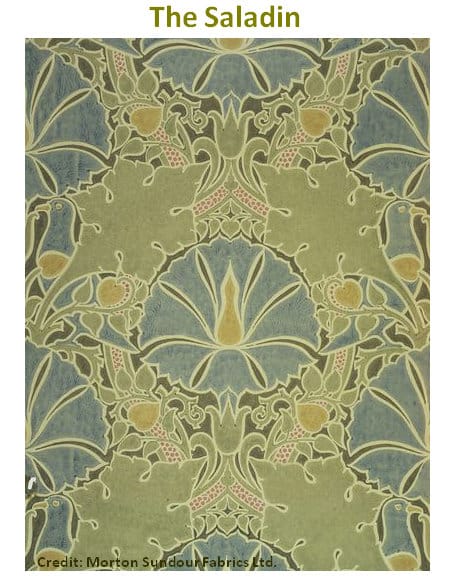 There are Country Floors locations all over America. Stop in and ask them to show you the Voysey style patterns shown below. The spirit of the Arts and Crafts movement is alive and well!

Tile used in Arts and Crafts:

Art tiles or decorative tiles are used all over residential and commercial applications.  Tile is an expression of art and personal style.  It is one of the best ways of decorating the house, especially in wet areas like bathrooms and kitchens. Naturally, homeowners prefer a surface that is water-resistant such as bathroom walls, shower walls, shower floors, and backsplashes.

Decorative tiles used in commercial spaces are all over the spectrum.  Many hotels use decorative tiles in common areas like tiles in lobby reception desks, restaurant theme walls with tile, and open kitchen tile areas.

For spas and pool areas, tiles are particularly useful. Many hotels and resorts have different themes such as sports, casual lifestyles, and entertainment.  Tiles are used in pool deck areas,  water features, and fountains.  Tiles with decorative animals, such as dolphins, or sea creatures are used in many Disney theme parks.